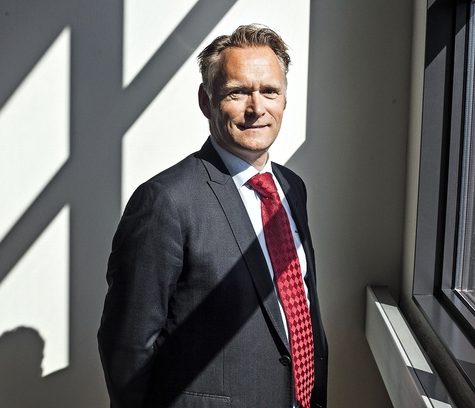 It has proved to be a fascinating start to 2020, not least of which due to automotive experts declaring 2020 as the ‘year of the electric vehicle’ and INDICATA pricing data highlighting the speed of change and variability in supply and demand of used cars in key European markets.

Evolution and insight
Highlighting the evolution of the industry and the need for automotive asset operators to proactively manage their stock, INDICATA’s pricing data has revealed just how the markets across Europe ebbed and flowed during the 12 months of 2019 – with fluctuations in supply and demand especially-in-relation-to-diesel during Q4

The speed at which used diesels have fallen out of favour for legislative and environmental reasons continues to be a challenge and will likely be that way for some time to come but INDICATA’s powerful pricing data insights is supporting dealers to manage these challenges across Europe.

Munich in May
And whilst we’re looking ahead, we are pleased to be a silver sponsor at the forthcoming Motor Finance conference and awards on the 20 May in Munich. Our international business development manager, Jurgen Claus will be speaking at the conference so please come over and meet the team.
See you soon

The new partnership between MSX International and the Autorola Group will see the global outsourcing business provide the Autorola Solutions online vehicle process management software to its OEM customers.
It is a unique offering in the market which both companies have developed over a 12-month period.

OEMS run some of the largest and diverse fleets
Solutions is already used by a number of companies in a number of different countries, and now MSX will provide Solutions to its OEM clients and their dealership networks that run some of the largest and most diverse fleets in the world.
Solutions has built up an enviable reputation for managing large fleets, from vehicle on boarding to remarketing. Every stage of the vehicle ownership is tracked to enable asset owners to keep a close eye on its vehicles.

Delivering bespoke asset management systems
Autorola will work with MSX to deliver bespoke web-based systems for OEM fleets that manage their vehicles on a regional level, not just from HQ. This includes setting up KPIs on every step of the vehicle management process.
“The partnership provides the perfect match, and we look forward to working with the MSX team,” explained Autorola Solutions business unit director Ib Kimose.
“OEM fleets are some of the most complex and we can set up Solutions to manage different processes for different types of car fleets. Our approach for managing leasing and rental fleets are very different to managing a press or management car fleet and Solutions can take this complexity and volume of vehicle management in its stride,” he added.

INDICATA has released its used car data insights which reveal how quickly dealers were selling used cars during 2019, across each of Europe’s big five markets, plus Belgium.
The INDICATA market analysis analysed 12.78m petrol and diesel used cars sold by European dealers in 2019, with the Spanish market witnessing the most severe fluctuations in average days to sell (ADTS) for both petrol and diesel used cars.

Spain was a volatile used market in 2019
In Spain, January saw the highest ADTS for petrol and diesel at 95 and 102 days respectively. In June the petrol ADTS reduced to a 12-month low of just 60 days, while November was the best month for diesels at 68 days. That accounts for a major swing of 35 and 34 days respectively which shows the volatility of the 2019 used market for Spanish dealers.
Germany and Italy reinforced the tough time some countries are experiencing with used diesels. ADTS figures stayed above 70 and 77 days in Germany and Italy respectively during 2019, which is why some dealers – with the help of INDICATA market pricing data – are exporting used cars to reduce stocking days and to help identify fast-selling replacement stock to buy.

INDICATA gives dealers a region, country and Europe-wide used car insight
“The power of INDICATA as a vehicle pricing tool is that it can give vendors a region, country and Europe-wide overview of vehicle demand and prices.
“It’s all about helping dealers find the right buyer for their vehicles. INDICATA can help change their mindset and treat Europe as one single marketplace for selling as well as buying the right used stock,” explained Andy Shields, INDICATA’s global business director.

UK demand for used diesels grows while new car sales fall
At the other end of the scale the UK reported an annual ADTS low for diesels of just 48 days in both April and October, with used demand consistently strong despite diesel new car sales falling in the market by a record 21.8% during 2019.
In some countries a fall in diesel demand has been balanced by consumers buying more used petrol cars. Across 2019 demand for used petrols was strongest in France with an ADTS low of just 42 days in April. Even its highest ADTS month in December rose to just 55 days, while the UK also reported strong consumer demand in April with an ADTS low of 46 days.

INDICATA is helping dealers manage used car stocking challenges
“The speed at which used diesels have fallen out of favour for legislative and environmental reasons continues to challenge European dealers. It will take a few more years for the demand and supply of used cars to match the needs of consumers in individual countries. In the meantime, INDICATA’s powerful pricing data insights can help dealers manage these challenges,” said Shields. 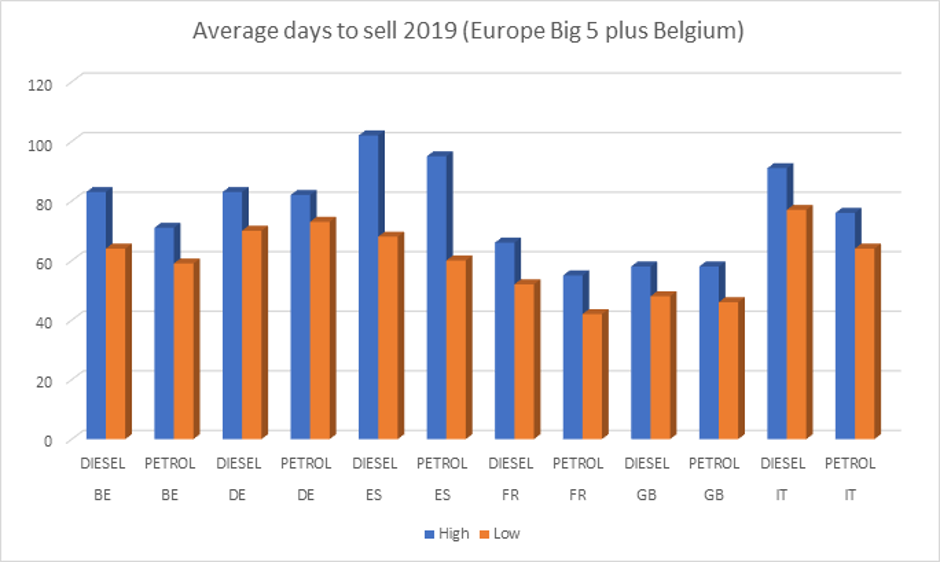 The French used car market sprung to life during Q4 2019 witnessing a strong uplift in online used B2C sales of both diesel and petrol vehicles. This was in contrast to the UK which saw a decline in the sale of used petrol, diesel and EVs.
According to INDICATA’s used market insights data for Q4 2019 for the Big 5 countries plus Belgium, the French market was buoyant during the quarter. Used diesel sales in France increased by 13% (13,234 vehicles) whilst petrol volumes also rose by 13.8% (10,048 vehicles). Meanwhile, used electric vehicle sales decreased by -17.5%, mainly due to market supply falling.

Contrast with rest of Europe
The uplift in diesel and petrol demand in France contrasted with Europe’s remaining Big 5 plus Belgium all of which witnessed significant falls in online sales. Experiencing the greatest reduction in sales volumes across both diesel and petrol, as well as in EV sales, was the UK.

France and Spain report growth in used petrol sales
Petrol sales were also down by -16.7% (-43,702 vehicles) in Germany; Italy -19.5% (-7,081 vehicles); and Belgium -6.6% (-946 vehicles). Spain was the only other market alongside France to buck the trend and experience an uplift in used petrol sales during the period, increasing by 1.2%.
“Q4 often sees a slowdown in used car sales in the run up to Christmas, but the period in 2019 was perhaps a reflection of the wider changes taking place across Europe with demand somewhat unsettled across all fuel types,” explained Andy Shields, INDICATA’s global business unit director.

Diesel sales continue to take the biggest hit
“Diesel continued to take the biggest ‘hit’ across many markets while EV volumes fell primarily on stock shortages in most markets. Only the French used market reported healthy growth across diesel and petrol, with used car registrations increasing across the year by 2.8% to 5.79 million.
“France was also one of the few European markets to report a growth in new car sales of 1.9%, although diesel registrations fell again to account for just one in every three new cars purchased,” he added. 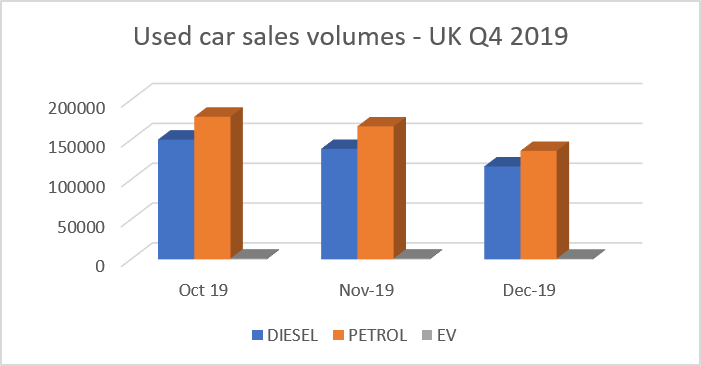 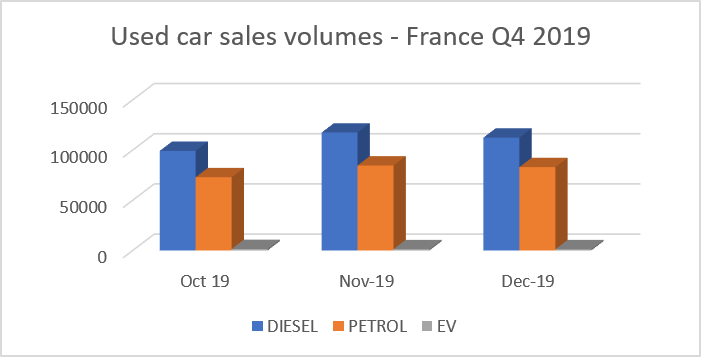 MSX International and Autorola Group sign strategic teaming agreement, offering an innovative IT solution to the fleet and remarketing space

Cologne, February 3rd, 2020 – MSX International (MSX) and Autorola Group (AUTOROLA) are pleased to announce they have entered into a strategic teaming agreement to provide the European automotive market with an end-to-end, fully integrated fleet and remarketing solution to accelerate business transformation and enable companies in the fleet and mobility space to become high performers.

For more than 25 years, MSX has worked closely with vehicle manufacturers around the world, supporting them in maximizing value and achieving measurable success through an innovative portfolio of automotive business solutions and services. As a global business process outsourcing (BPO) provider in the automotive space, MSX is now accelerating into the fleet business to offer OEMs a global managed services solution.
AUTOROLA is a global leader in online remarketing and automotive IT solutions for professional used car and fleet management. The teaming agreement is focused on Autorola Solutions (a business unit of Autorola Group) which offers lean fleet services based on state-of-the-art online systems. These work together to support efficient fleet management processes from acquisition to disposal for fleet, OEM and leasing companies.
The teaming agreement builds on the long-standing relationship between the two companies and aims to provide an end-to-end, integrated, web-based and modular fleet and remarketing solution that covers the entire lifecycle of fleet vehicles – from in-fleet and de-fleet processes to managing vehicle resale and post-sale services.

Two market leaders join forces to revolutionize the fleet and remarketing space and provide solutions to key challenges
In today’s highly competitive and growing fleet market, traditional fleet management models rely on multiple local or regional processes and systems which limit performance in the value chain. Therefore, it’s critical that companies operating in the European fleet and remarketing arena must, in the short term:

• Manage their businesses at a regional level, not just focus on the national market
• Connect easily with and leverage capabilities of multiple potential suppliers along the value chain
• Deploy mobility services
• Accelerate vehicle time to market to mitigate depreciation and lower costs
• Digitalize fleet vehicle lifecycle processes for accuracy and speed
• Use new retail channels for improved sales, brand recognition and customer loyalty

“By teaming strategically with AUTOROLA, we are able to enhance and expand our offering to our customers in the field of fleet and remarketing. The goal is to enable them to overcome key challenges and pain points that currently have a negative effect on their profit as well as to provide them with the right tools to seize market opportunities and support their digital future,” said Rob van Rijswijk, Vice President Product Management, MSX International. “Through this agreement and due to the innovative capabilities of our open and fully integrated solution, MSX will be empowered to act as the fleet and remarketing integrator, connecting additional, specialized third-party providers to one BPO platform.”
Peter Groftehauge, Autorola Group CEO, said, “Our strategic partnership with MSX brings forward a unique offering that is based on specialization, industry knowledge and cutting-edge IT solutions. The combination of our automotive expertise will bring fleet and operational performance to the next level.”

About AUTOROLA Group
AUTOROLA Group is a global leader in online remarketing and automotive IT solutions for professional used car and fleet management. AUTOROLA Group is headquartered in Denmark and the company has currently approximately 420 employees and subsidiaries in 19 countries across Europe, North America, Latin America and Asia-Pacific. AUTOROLA Group is committed to a constant renewal process throughout the digital transformation. The company adapts constantly to the needs of our customers, always from an online perspective, to achieve success in the proper commercialization of used vehicles coming from in and de-fleeting processes. AUTOROLA Group is divided into three global business units: Autorola Marketplace, Autorola Solution and INDICATA.