A major bike and car insurer has appointed Autorola Australia to build an online remarketing website to assist its customers in selling their used cars or motorcycles.

Swann Insurance, part of the global IAG Group approached Autorola to fulfil its strategy of extending its customer service portfolio beyond just insurance.

The used motorcycle website went live in 2016 and the used car website has also just been launched at swannmotomarket.com.au

Customers can apply for a free valuation for their used car or motorcycle and then Autorola will upload it onto its online portal to offer to its network of 4,500 active trade buyers.

“Selling to trade buyers is often much simpler and quicker than selling to a retail buyer,” explained Philip Browne, Autorola Australia’s country manager.

“Offering the car or motorcycle to our nationwide buyers ensures the consumer receives a strong price and they receive their money within just two days of the sale. Response so far from consumers has been very positive and Swann is set to launch a marketing programme to reinforce its new service offering,” he added.

Autorola has announced that it has launched INDICATA, its web-based business intelligence and market insights software for the management of used vehicle inventories, in Turkey.

Turkey is the 11th country to launch INDICATA

The INDICATA platform is also available in Denmark, Austria and Germany, The Netherlands and Belgium, Spain, France, Portugal, Italy and Sweden.

“Our new Business Intelligence platform is yet another example of our innovation in all aspects of vehicle remarketing and used vehicle management,” said Jörg Höhner, Global Managing Director INDICATA.

“There is a lot of business intelligence technology out there that runs various analyses post-mortem. This is like looking in the rear-view mirror to understand where you are going.

It’s just not the right way to get the insight you need. However, with INDICATA, we have gone beyond traditional pricing evaluation tools to create a solution that truly works with a complete view of the market in real-time.”

“In a time where the market conditions change faster than ever there is a need for dealers and manufacturers to fundamentally adapt their used vehicle operations and management of inventories.”

Reaction from OEMs and their dealer network in Turkey has been very positive as Oğuzhan Saygı, Managing Director, Autorola Turkey explained.

A positive reaction in Turkey

“OEMs and their dealers can take a view on used vehicle prices from both a national and local level to help them understand and monitor how their own used vehicle operations are performing.”

Further information can be found on www.indicata.com

The partnership allows Renault UK’s 160 dealers to trade stock between each other, search for used Renault cars that will help to replenish used stock back into dealerships, while also making its used vehicles available to over 2,000 active buyers. Used stock can be easily uploaded to Autorola’s online remarketing portal, Autofind, by the dealers to view and buy.

Renault UK has approximately 15,000 used cars in its network, including a comprehensive selection of electric and traditionally-fuelled cars and MPVs under the Approved Used Renault banner, which offers a 12 month warranty as standard on all vehicles.

Matt Downing, Renault UK’s TCO and Remarketing Manager, said: “Our partnership with Autorola gives our national network of used dealers improved access to used vehicles both internally and externally, while helping them to quickly sell unwanted stock to the trade.

“The Autofind online portal provides complete peace of mind for our dealers, who can focus solely on selling used cars to the widest possible retail audience, while maximising profitability through reduced stocking days and improving vehicle turnover.”

Jon Mitchell, Autorola UK’s Group Sales Director, added: “Demand for Renault’s used range has always been high with buyers on our portal; the early reaction from Renault dealers to buying and selling has been positive. We look forward to helping the Renault dealer network maximise efficiency and achieve further growth in their used car businesses.” 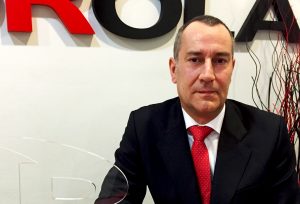 The Spanish new car market ended 2016 in a much healthy state with all the major sectors – leasing and companies, rental and private all increasing in size.

Rental and leasing reported double digit new car growth, while the private sector lagged behind slightly, still hindered by the reluctance of some banks to lend consumers money.

Currently the used car sector is booming with around 1.8 million annual transactions, but due to the low new car sales volumes experienced in 2008-12 there is still a major shortage of used stock in the country.

20% of used cars coming from imports

The resulting growth in imports comprised around 20% of the used market with dealers being forced to source cars from abroad just to satisfy demand.

“We have 6,000 active buyers sourcing cars on our Spanish platform who are after three to eight year old cars that cost under 10,000 Euros.”

“That compares to the sub-two year old market where ex-OEM cars and the growing volume of ex-rental cars on the back of a buoyant tourist industry are in an over stock situation. Typically this accounts for cars between 10,000 and 18,000 Euros,” he added.

In some areas of Spain like Barcelona and Madrid private motorists and businesses will be forced to sell their aging used car and used vans to meet strict new CO2 regulations. Used car and vans not meeting these regulations will not be allowed into the city centres.

“This may cause further used car and van shortages in the future as many older vehicles will have to be scrapped,” said Lohaus.

The quest for increased efficiencies within the asset management and vehicle remarketing industry over the past few years has meant the market has embraced digitalisation. More processes and used vehicle selling now happens online which is why the INDICATA used vehicle business intelligence platform has been embraced by OEMs and dealer groups alike.

“Manufacturers realise that if they can help their dealers generate more used car sales then there will be more scope for their network to buy more cars from both the manufacturer and rental buy back schemes. Through using INDICATA dealers know the exact pricing of a used car to sell it in the fastest possible time which is allowing them to stock more cars over a period. This helps protect residual values as dealers aren’t forced to heavily discount stock to generate sales,” explained Lohaus.

In theory the speed of sale can help an OEM go from selling 2,000 used cars to its dealer network per year to selling 6,000 units in just 12 months. More importantly dealers are making good profits on their used cars and residual values are being protected.