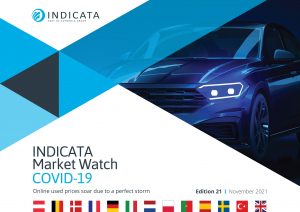 This is the second successive month EVs have sold faster than traditional ICEs in Europe.

European used car sales still rise
Overall, in October Europe’s online B2C used car sales increased by 1.4% month-on-month (MoM) but were down 2.5% year-on-year (YOY) due to supply constraints in most markets. However, October YTD sales were still 12.9% higher than the same period in 2020 and 10.9% above 2019 levels reinforcing the increased focus on used cars as new car supply remains restricted.

The net effect of this high demand, constrained supply and limited stock is sharply rising prices which are up in all left-hand-drive markets since January 2021. Prices are up 3.2% in France, 8.6% higher in Germany, 10.2% in Italy and 14.9% in Portugal, while UK prices have risen 28.3% since the start of this year.

It’s the perfect storm for the consumer
“The used market continues to thrive despite a shortage in stock. It’s interesting to see that greater availability of EVs is pushing up both wholesale and retail sales. It’s the perfect storm for the consumer as they look to switch to an EV faster than planned because of their availability,” explained Andy Shield, INDICATA’s global business unit director.

“It will be interesting to see when stocks of used petrol and diesel cars start to improve whether demand and prices of EVs will be impacted. The underlying fact is that consumer awareness of EVs is improving which is good news for OEMs and dealers,” he added.