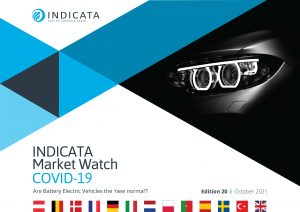 The 40% year-on-year stock turn increase for BEVs and a 25% increase for hybrids shows alternative fuel cars are selling faster than ever, and stocking days are gradually moving more into line with used petrol and diesel cars, although volumes remain small.

These trends come at a time when European used car markets remain affected by the shortage of new car production caused by the semiconductor shortages.

All countries report falling stock levels except France
Dealer stock is 2.2% down heading from September into October and year-on-year stock levels are on average 7.9% lower online, for all countries except for France. This has led to major supply constraint issues which in some countries like the U.K. are becoming so severe prices have risen by 27.5% between April and the end of September.

Overall, Q3 European used sales were 10.7% above pre-pandemic levels as drivers turn to the used market for their next car rather than waiting for a new car to arrive.

“The restriction in new car production continues to have a big impact right across Europe and our report puts that into perspective at a country level,” explained Andy Shields, INDICATA’s global business unit director.

The used market will remain under pressure
“There are plenty of signs the used market will be under stock and price pressures for many more months to come and we aim to keep a close eye on these trends. We have seen the first signs that car makers are injecting life into the nearly new market with some tactical registrations at a time when some markets have been short of younger stock for over 18 months,” he added.

To download the full 30-page 13-country report go to www.indicata.com/corona

To download the full 30-page 13-country report go to  www.indicata.com/corona