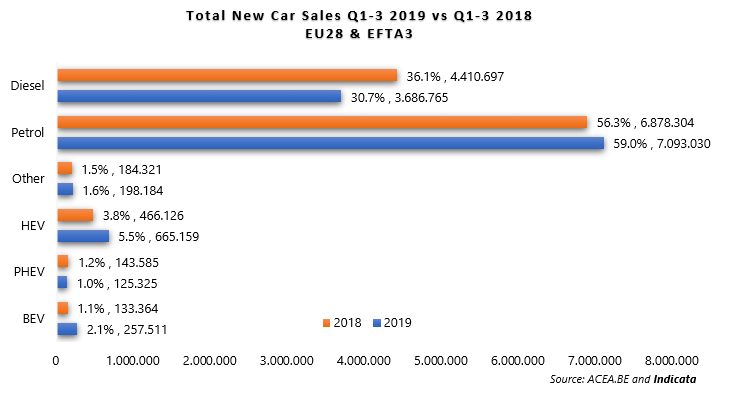 In the first 9 months of 2019 Battery Electric Vehicle (BEV) sales grew in Europe by 93.1% but this still equates to just 2.1% of the total new car market. Hybrid vehicles have also grown by a healthy 42.7% in the first half of 2019 and now account for just over 5.5% of new car sales.
Other powertrains such as Compressed Natural Gas (CNG) and Liquefied Petroleum Gas (LPG) have seen their market share hold at around 1.6%, mainly due to its popularity in Italy. However, Plug-in Hybrid EVs (PHEVs) have seen sales drop by 12.7%, accounting for just 1% of the new car market across Europe for the first 9 months of 2019. The decline in demand from fleet operators is part of the reason.

Fleets see increased costs of fuelling PHEVs
Several countries have or had a beneficial taxation system for company drivers choosing a PHEV over a diesel vehicle, making them a popular choice from a personal perspective. However, fleet operators noticed a significant increase in fuel costs as drivers were commonly not charging them, just using them as a petrol vehicle. This meant cars were performing worse than a straight petrol version of the car as the PHEV also boasted added battery weight.
Feedback from auction houses like Autorola confirmed that many PHEVs were coming off fleet having never been charged and with the charging cable still in its original sealed bag.

Bristol city centre moves sets a worrying precedent
On 5th November the UK port town of Bristol became Europe’s first city to approve a ban on all privately-owned diesel cars from 2021 between the hours of 7am and 3pm every day.
Whilst Clean Air Zones (CAZs) are appearing across Europe, the difference here is that the local council has not distinguished the considerable difference between old, high emission diesels of the past and new, clean, Euro 6 engines with little to no NOx and low CO2 emissions. The full details of the fines and charges have yet to be published but the ban includes parts of the city centre as well as the nearby M32 motorway.
We will need to wait until February 2020 to see if the national government approves the business plan, which is predicted to cost £113.5 million, but it does set a worrying precedent. 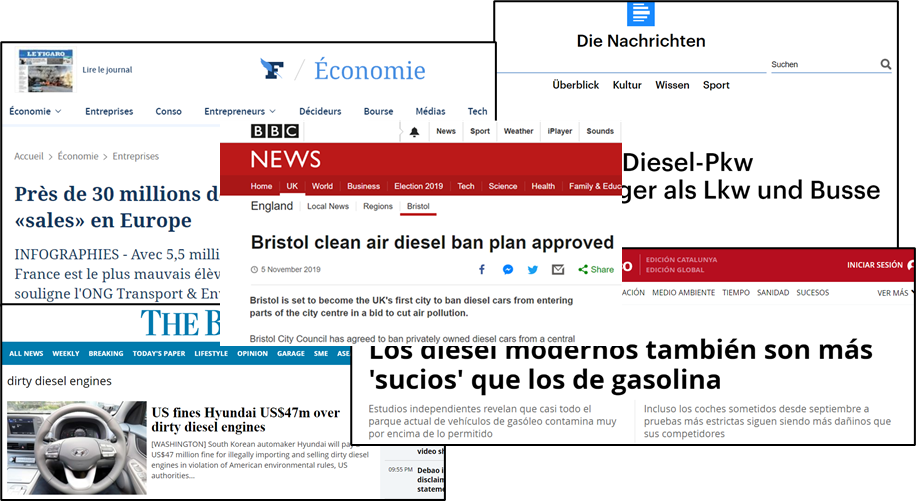 INDICATA sees impact on new and used diesel market
Some cities already have bans or restrictions on older diesel cars, pre-Euro 6, whilst Oslo has legislation in place to ban all diesel cars from certain roads on days with acute levels of air pollution. This progression to a blanket ban on all diesels will impact the new and used diesel car market as INDICATA data is seeing.
Despite reports and data about how clean the latest Euro 6 diesel engines are, the press continues to use the phrase “Dirty Diesel” with gusto, whilst politicians and lobbyists continue to talk about introducing more clean air zones. The message received by many drivers and consumers is a clear one to “not buy diesel.”
The high-level view is that drivers would choose electric or hybrid vehicles, the reality is most lost diesel sales have gone to petrol engine cars.